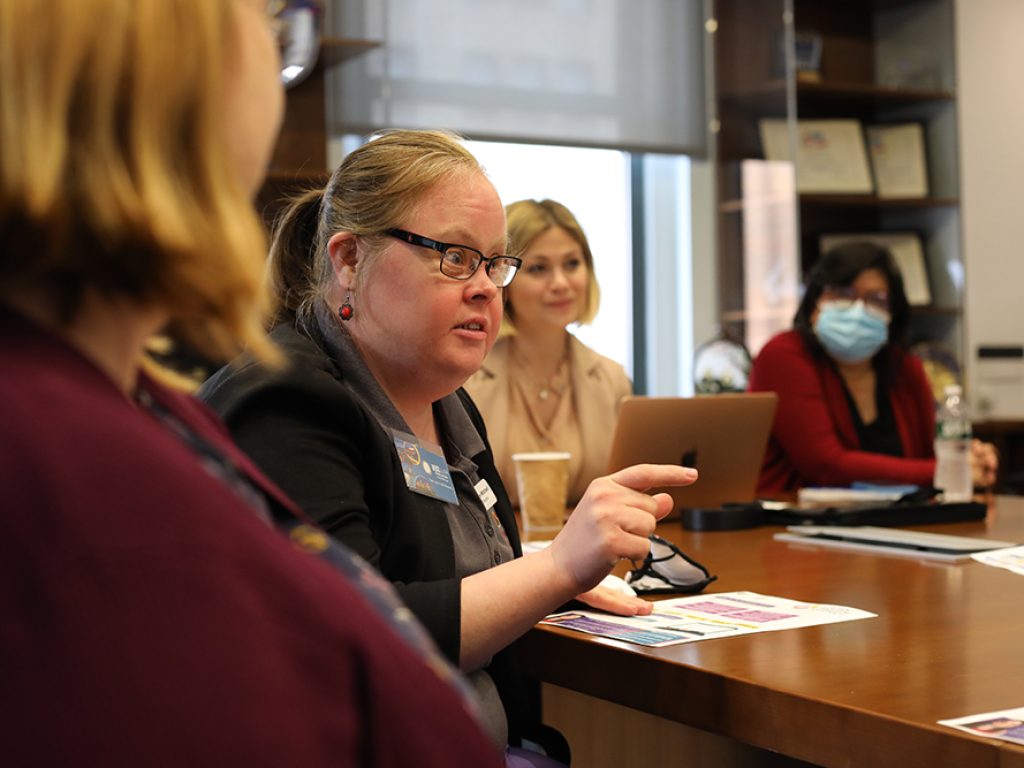 by Down Syndrome Australia Board Director Claire Mitchell

When we arrived in New York before COSP15, Ellen, Lisa and I met with the people from the International Disability Alliance at a briefing to find out what we had to do and how we could be involved during the week.

Executive Director Vladimir Cuk and Human Rights Advisor Bethany Brown ran the meeting and some other people from their team.

It was exciting to meet some of the people who I would be working with across the week.

On the first official day we met with people from the Department of Foreign Affairs (DFAT) and the Department of Social Services (DSS) who organised a big room for members of the Australian Delegation to meet to watch the Civil Society Forum.

The Forum was very structured, as support people were needing to translate for the people with different languages and to talk about where they were from. I listened to all the information with Ellen and Lisa’s support.

Unfortunately, there wasn’t information in Easy Read, which would have been so much easier to follow. It is important for people with intellectual disabilities to be able to understand what they were reading.

At the meeting we met Liz Reid from Australian Federation of Disability Organisations (AFDO) and talked about her role and about getting the information in an accessible format.

On the first day we also met with Down Syndrome International and Inclusion International to talk about the new Listen, Include, Respect Guidelines.

The Guidelines have been thought out very well and this is how it should look, so everyone can understand and have a voice. It is important that we can all be heard.

The Guidelines have been broken down into sections using different colours which really helps, and I think there is enough information on each page.

Everyone at the meeting took their time and the Guidelines were presented in an accessible way. We thought the meeting went really well.

After the meeting I was able to talk to Bryan Russell from Peru, with his translator as Bryan speaks Spanish. Bryan is the first person with Down syndrome to campaign for a publicly elected seat in a government.

We gave each other our business cards and I gave him a small koala and showed him postcards of Brisbane and invited him to attend the World Down Syndrome Congress in 2024.

Presenting at the United Nations

Being at the General Assembly at the United Nations Headquarters in New York felt like being in the Green Room of the House of Representatives at Parliament House in Canberra.

I followed the process for the election of new members to the Committee on the Rights of People with Disabilities – they were getting all the votes before the final election that a few people were nominating for. The Australian Delegation were confident that Rosemary Kayess would be voted back onto the Committee. Everyone was very excited when her name was drawn out and celebrated her great achievement.

Before I spoke in the General Assembly, Ellen and I moved to the floor and we sat at a table with a built in microphone that didn’t need adjusting. This is where I delivered my presentation.

It was my first time in New York and at the UN and I was excited and very happy. I felt so proud and honoured to be representing Australia, especially in something that I am very passionate about.

I was not nervous because I thought about all the work and training that I have done previously, especially when I worked with a voice coach. I remained relaxed and focussed. I really felt just like everyone else that was there in the room. I felt important and it was special.

I thank Ellen and Lisa for giving me this opportunity to be involved and for supporting me to participate. I am very appreciative of their assistance.

Later Mum told me that all my family had been online in Australia watching the UN media channel to see me speak and everyone congratulated me and that meant a lot to me.

On Wednesday and Thursday we went back to the UN to hear from different organisations about other issues at the Round Tables.

Over the week we were able to meet with other organisations and advocates from across the world to discuss some important issues.

One of these meetings was with Anna Fedewa and Kayla McKeon from the National Down Syndrome Society (NDSS) in America. Kayla is the Manager for Grassroots Advocacy and Anna is the Manager of Public Policy. We invited them to join in an online meeting with the DSAN, to tell our members about the different ways they talk to their local politicians to change laws.

Kayla is a very independent and inspirational young woman who has achieved so much. She says she enjoys being independent and will only ask for support when she needs it. She also spoke about the US laws that would make it very difficult for her to marry. We talked about her work to make things better and about inclusion for people with Down syndrome and the World Down Syndrome Congress in Brisbane.

At these meetings we talked about what we do as an international community and how important it is for people no matter what type of disability they have, to be included to participate and involved in their communities and to be just like everyone else.