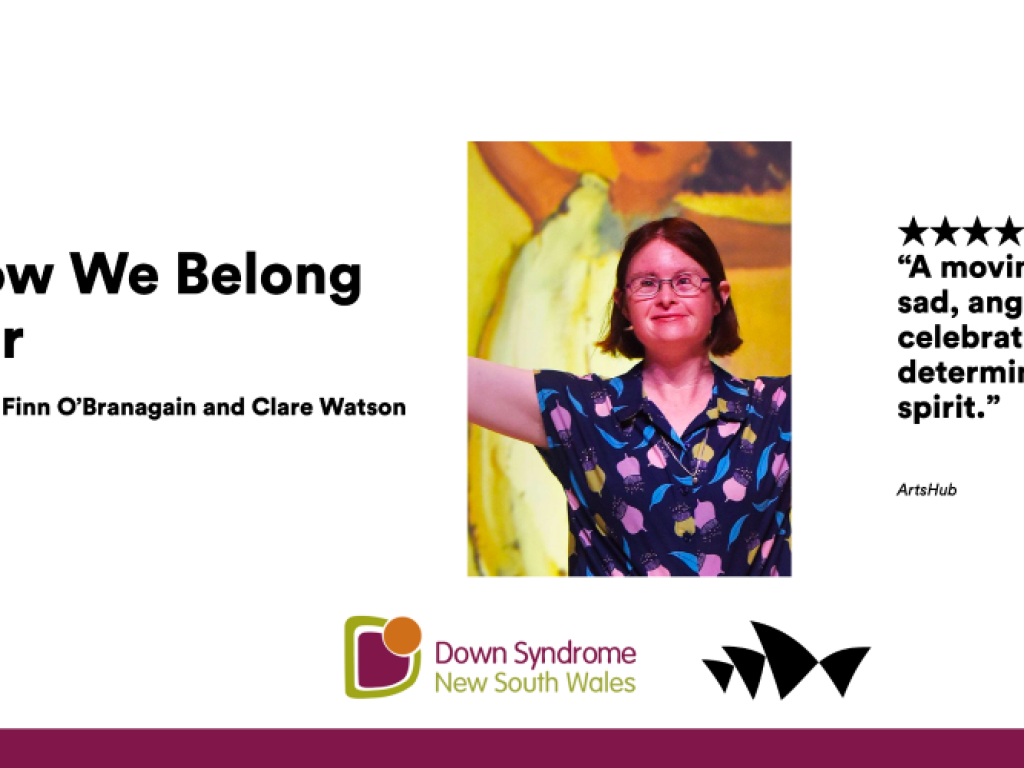 Join us for an afternoon at the Sydney Opera House to meet and mingle with Down Syndrome NSW members on Saturday 10 September from 2.30pm to attend “You Know We Belong Together”. Created by and starring Julia Hales, this hit production pairs a personal exploration of Down syndrome with ‘Home and Away’ dreams.

From a recent article in Concrete Playground, plays like “You Know We Belong Together” aren’t a common sight on Australia’s stages, and that’s one of the reasons that it exists. Created by and starring actor and writer Julia Hales (ABC’s The Upside), it features a cast performers exploring the daily reality of Down syndrome — and the fact that actors with Down syndrome are so rarely featured in Australia’s cultural output.

The starting point is right there in the Sydney Opera House-bound production’s name, which should’ve instantly gotten one particular song stuck in your head.You Know We Belong Together takes its moniker from the first words to Home and Away’s theme tune, a soap opera that Hales has been a life-long fan of. Watching the show’s Summer Bay-set antics, she also noticed the inescapable fact that she wasn’t represented in its melodramatic antics.

“I want people to see us for who we are and what we do as part of the world,” says Hales. “I watched every single episode of Australian soap opera Home and Away since it first aired in 1988, but I’ve never seen another person with Down syndrome in the cast.”

“I used to dream of landing a role in it and finding love. So I created You Know We Belong Together. This is a story for us, by us.” Hales continues.

“You Know We Belong Together” features Hales alongside six other Western Australian actors, all of whom draw upon their own lives and personal experiences with Down syndrome. The result combines monologues, video, scenes, dance and song, and also takes place on a replica of Home and Away’s diner — allowing Hales to live her Home and Away dream.

Limit of 40 Tickets Available, Seated Together with Down Syndrome NSW.

Arrive by 2.00pm to collect tickets at the Box Office on the Ground Floor of the Sydney Opera House, located near the Drama Theatre.