Dee and Jon Amos share how receiving letters from across the country during the COVID-19 pandemic helped them to keep their mental health in check. 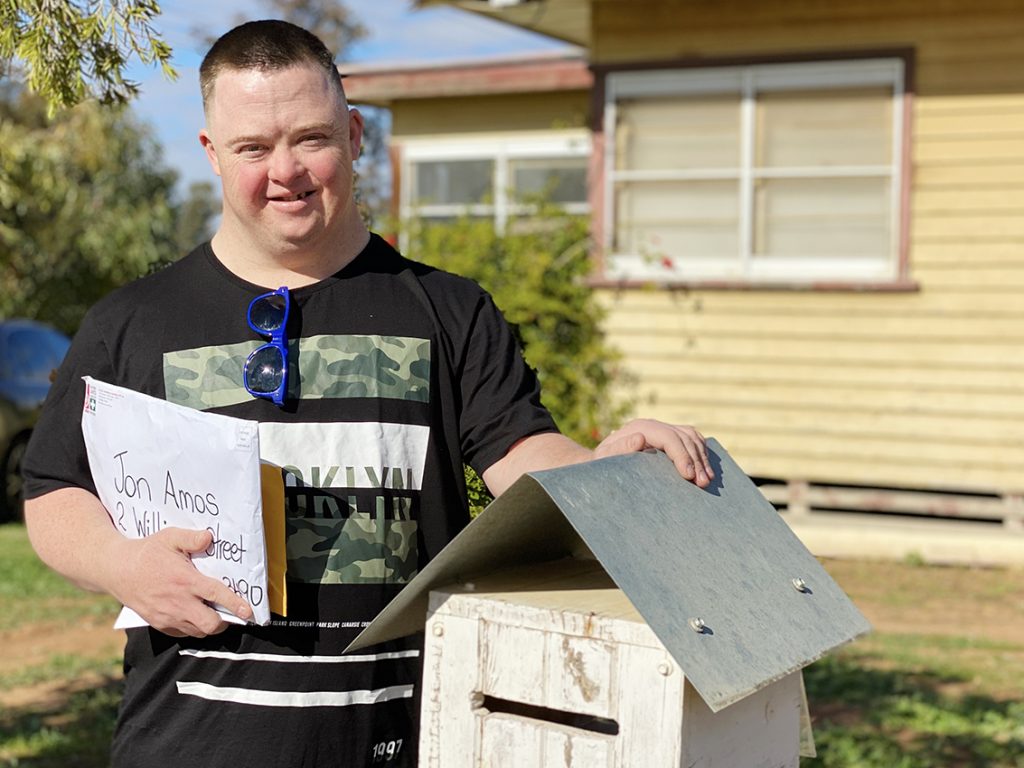 When the COVID-19 pandemic became serious in Australia, Dee Amos knew this was bad news for her brother Jon. As a social butterfly, he was not going to do well in quarantine. So she thought of a creative way to keep his spirits high and his community connections strong.

Putting a call out for pen pals not only helped to brighten Jon’s day when he went to check the mail, it gave him back some connection to the outside world.

If I am honest, I was scared when I first heard of coronavirus. Our first instinct is to always protect our brother Jon, and here was something coming our way that I wasn’t sure we could protect him from.

He had just had his 30th birthday party surrounded by friends and family — absolutely in his element — and then all of a sudden, we were faced with having to turn his life upside down and quarantine him at home.

We have grown up in Ouyen, so our connection is as strong as you can get. Jon went to primary school here, and then we made the choice for him to attend special school in Mildura when he reached high school. We have always been supported by the local community, whether it’s at the local footy where Jon barracks for his team, or just going up the street where he will talk to absolutely anyone.

We made the choice around March 12 to keep him home to help limit the people he was coming into contact with.

During the week Jon attends day programs in Mildura and lives with our older sister, Toni, and her family. The first step was to keep him home from the programs, which was a hard choice because this has been his routine for more than 10 years.

Once he was home in isolation, the hardest part was stopping his daily trips to the supermarket and bakery. He is a social butterfly who loves to see people and be with us, so those first few weeks were incredibly difficult as he adjusted to his new normal. We had several emotional moments where he missed Toni and her family or wanted to go and see people. All we could do was sit there and ride them out with him.

I tried to explain what coronavirus was to Jon in different ways, but then a friend gave me a social story that she had used in her role as a speech therapist. Jon was excited to go camping on the Murray River like we have every Easter since he was born. We read her story and explained that he needed to stay home so he didn’t get sick, to which he replied, ‘No not sick, I’m tough!’

I then tried to explain that he needed to wash his hands lots to make sure he didn’t get sick, to which he replied, ‘Yes, wash hands at river – nice and clean!’

Finally, I resorted to telling him the police said we couldn’t go, and that we had to stay home. His response was to draw a map of how we could get around the police and get to the river. I think he crafted his plan  from watching too many crime movies.

One Sunday early into isolation we were having a bad day. Jon missed seeing people and was getting quite emotional and agitated that he had to stay home. I decided to let him work out his frustration by boxing, and then I shared a photo of this on Facebook. We often share the good stories, but I think it’s just as important to share the not-so-good days too.

After I put up the photo, a family friend contacted me and suggested starting an event on Facebook where people could join and write to Jon as a way to brighten his day and give him back some connection to the outside world. She is a well-known celebrant in our area and shared the event with her wider connections. Things escalated from there.

The first letter Jon received was from a beautiful lady who I teach with. She had created a colouring pattern for him to finish using red and blue, knowing that they are his favourite colours. It was in our letterbox about three hours after we created the group. By that night he had three letters, and it has continued every day since then.

I started filming him opening his mail and sharing it on Facebook. Soon I had people contacting me saying that it was the highlight of their day to sit and watch Jon get his mail. Recently, a lady who was one of the first to send him a letter, stopped me at the supermarket to say that she lives alone with no family around her and that she could never explain how much the videos have helped her during this time.

I can’t tell you how many times I have received shivers or started crying because of a letter. We are incredibly grateful to have Jon in our lives, but some days are tough and asking for help or admitting that those days are tough is something that has always been hard. I don’t think the hundreds of people who have sent him letters will ever fully grasp what it has meant to our family. It has given us support in a time when we needed it the most and it has given us the chance to share the Jon joy with others who need it.

For me personally, I have learnt how privileged I am to live this life. I have one of the brightest lights on this earth in my life every day. I get to laugh with him, love with him and explore all the ups and downs with him. We are surrounded by the most incredible community who will always step up when we need help.

I have also learnt about the good in people. I would give anything to meet those who have sent Jon a letter just to give them the biggest hug and say thank you. In a time where all you seem to hear about is the bad, it has been incredible to be able to spread the good.

Why do you like getting letters in the mail?

I get so many letters! I like opening them and being surprised.

How does it make you feel?

How many letters have you got so far?

What are some of the different things in the mail that have come?

Where are some of the places people have sent you letters from?

Western Australia, Tasmania, Darwin, Queensland – I even got one from America last week! I also got special visits from the Victoria Police and the local Fire Brigade.

Have you got any letters from overseas?

Yes, one from a little boy in America. He had lost his Dad at the start of the year and sent me a rainbow because they made him feel better. We are putting together an ‘Australia’ pack to send back to him.

What is your favourite letter?

I got a really special letter and jumper from my friend James Harmes who plays for Melbourne Football Club. He sent me a card and his Indigenous Guernsey from last year. I love the football and it has been hard not being able to go watch it this year.

What other things have you been doing to stay busy at home?

Camping outside, playing games, cooking and playing tricks on my family!

What is the first thing you want to do when you can leave the house again?

Go on a holiday to Melbourne, stay in a beautiful house so I can go to the football and have a hot chocolate and bacon and eggs!

You can become one of Jon’s pen pals by joining his event on Facebook at: Jon’s got mail!