Nearly five years ago my husband John and I were looking for an extracurricular activity to enrol our three children into. 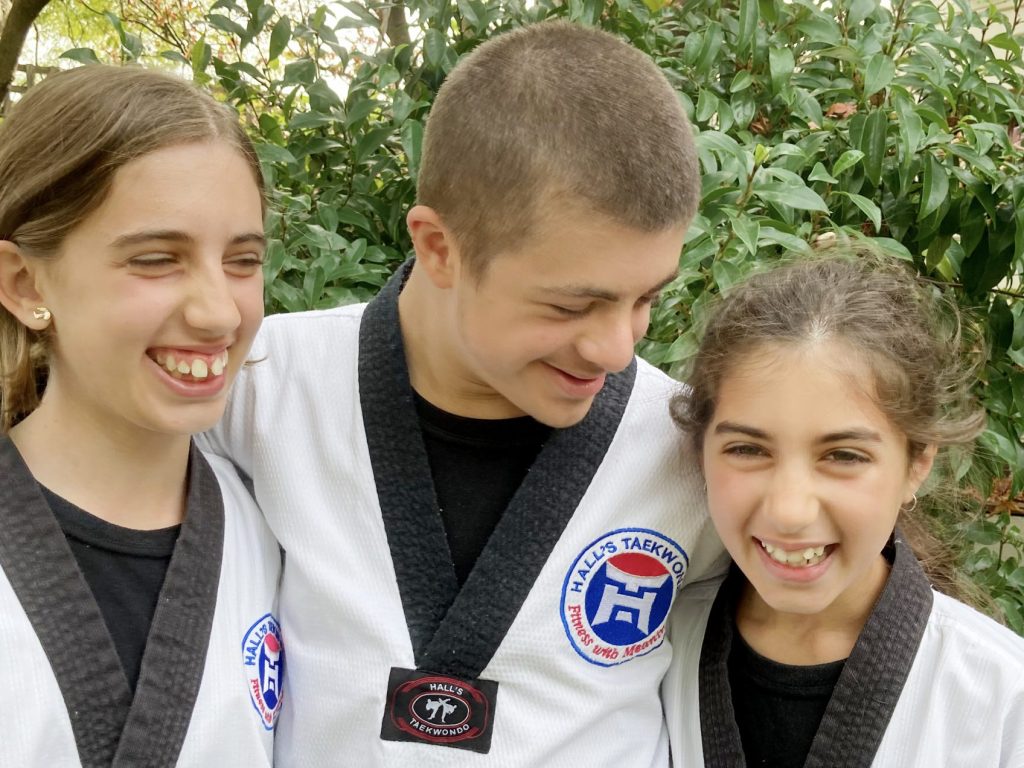 Our goal was simple; to find something physical, that would challenge them all, but especially our son Alex, in different ways.
Alex, who was 8 and a half years old and has Down syndrome, enjoyed physical activity and games.

Martial Arts appealed to us due to its focus on fitness, co-ordination and building strength. We discovered it would also help to develop discipline, patience, respect, and a positive attitude.

The first Taekwondo centre we visited insisted Alex be placed in a group with kids his age, despite our explanation that he was not functioning physically or cognitively at that level. The instructor was concerned it “would not be fair to the other parents”.  This was not the supportive environment we hoped for. Given their inability to offer flexibility, understanding or compromise, we left.

The head instructor of the second centre listened to our concerns, and suggested Alex join a trial class with his youngest sister Olivia. Alex was not much bigger than the other 5-year-olds, so it seemed like a reasonable plan. The centre slogan printed around the building was, ‘Black Belts are White Belts that never give up’ (White Belt being a reference to beginners). This was consistent with our own philosophy, so we felt good about this choice.

Initially Alex treated classes as another opportunity to play. Although he settled down and learnt to listen just like the other young children, it was clear that Alex was having trouble following his lessons. A large training room, filled with many children and distractions, with complicated verbal instructions compounded by a hearing loss, made it hard for Alex to follow the class.

We discussed our concerns with Alex’s teacher and decided that I could train next to Alex and give him one-on-one support during the class. Although it was my pleasure to help, and an obvious benefit to Alex, I felt self-conscious standing up in front of the other adults and parents. Despite this, we persisted, and it helped Alex keep up with the other kids.

Fortunately for us the NDIS was introduced in our area at the same time, and after talking with the Taekwondo centre, we applied for a support worker to assist Alex in class. Alex loved having the extra one-on-one help. His willingness to participate in all the activities increased, and he was happy with the extra social connection he had with his support worker. He was successfully performing all the tasks required of him.

Alex continued to train twice a week at the centre with the assistance of his support worker, and practiced at home with us just as often. Alex was even showing a passion for his sport, often breaking out Taekwondo moves whilst dancing to Michael Jackson at home and in public. He would even practice the artistic form of the sport – poomsae pattern – during visits to the park, the beach, or even the shopping centre!

Alex continued to pass all the relevant assessments which ensured he progressed at the same rate as his sister Olivia, and fellow students. Alex successfully passed his gradings on his path to beginning the Black Belt syllabus, a journey that would take a further two and a half years. There was no stopping Alex. He was bound for Black Belt.

In 2020 throughout the COVID-19 lockdown, Taekwondo training went online. Classes were streamed via Zoom, and all three of our kids were able to continue their fitness training at home.

John stepped in as ‘home head coach’ and trained with Alex and Olivia during the livestream lessons. Alex’s patterns, kicking and punching combinations, groundwork and self-defence got stronger, faster, and sharper. But not without an immense amount of practice to reinforce Alex’s memory and physical skills. Belief that we were nearing something special was rising.

Alex and Olivia received their Cho Dan Bo Belts (belt prior to Black Belt) in December of 2020, so John and the kids increased their level of training over the summer holidays by using videos created by the Taekwondo centre, to ensure Alex was given the best chance to achieve his goal.

It consumed most of our spare time, which we were happy to commit to, as long as Alex continued to enjoy his classes and practice – which he did. The threat of having to repeat the term if Alex failed, spurred us along.

Alex did not complain once about attending his classes or training at home. Olivia trained right there with him, encouraging him all the way. Sophie, already a Black Belt herself, knew the patterns and moves and acted like second coach, helping Alex practice at home when John or I were tied up with work or had other commitments.

At the end of March Alex and Olivia attended their Black Belt grading, along with students from our club’s other Taekwondo centres in Victoria. Alex successfully completed all the relevant assessments, including the Koryo pattern. After being presented with their Black Belt, Alex and Olivia waited on their spot for the last task: to break wood.

Having sat through an hour and a half of grading, with emotions running high, and sometimes watching through cracks in fingers while our hands covered our eyes, it came down to this last task. We had practiced at home in the lead up to this with Styrofoam. Alex had good technique, so our confidence was high.

In that moment, Alex forgot his training, and from sheer excitement, wound his arm around like a windmill to slam through the wooden board. Sitting on the sideline, watching him, holding my breath, I was filled with pride at both the fortitude and accomplishment my son was demonstrating. I loved every moment of it.

We celebrated well into that evening. It was truly one of the proudest moments of our lives.

The journey to Black Belt represented the hard work and dedication we had made together, especially over the last year. It represented a family, my family, who came together to support one of its own, to achieve a dream none of us dared to imagine, five years ago.

I continue to believe that anything is possible for my son.