The outbreak of COVID-19 has opened up new ways for people to connect with these services by utilising video conferencing platforms. 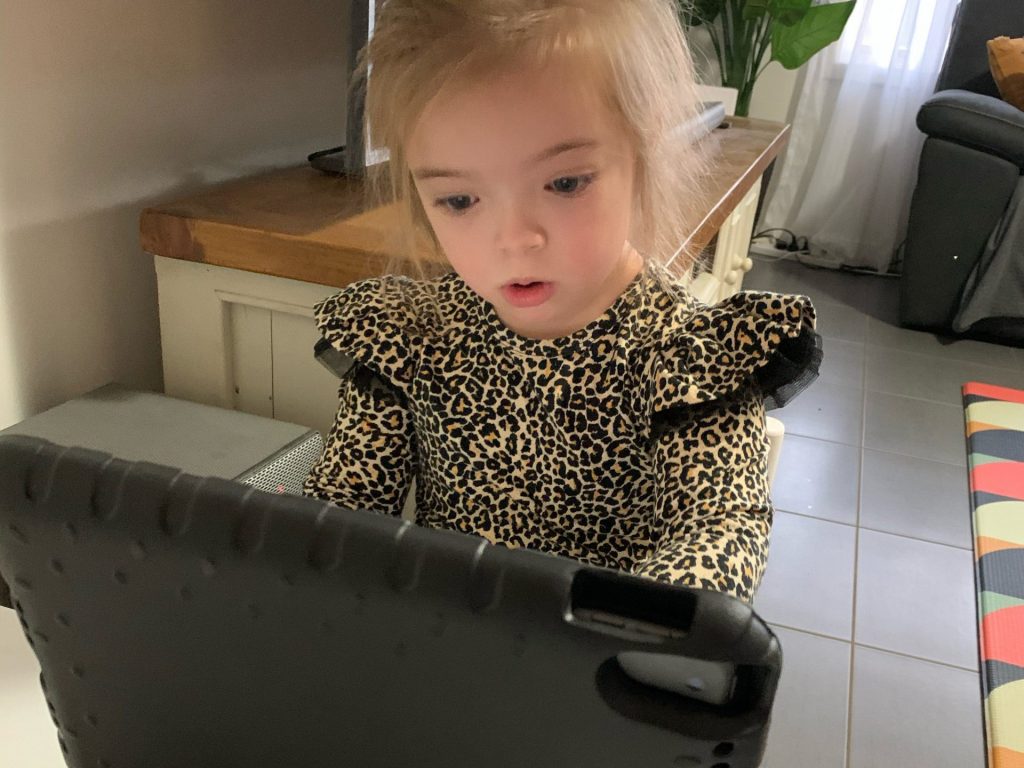 Whether you’re living remotely or living on the road, people with disability and their families need ways to connect with therapies, without having to travel hundreds or even thousands of kilometres to access them. Two families share their experiences of what it has been like to use telehealth services during the COVID-19 pandemic, and how they’ve benefitted from these new ways of connecting in 2020.

“Our closest regional city is Karratha which is a six-hour one-way trip on a bitumen road, or four hours if we take the dirt road,” Tahlea explains.

Before COVID-19 Thea used to access occupational therapy in Tom Price twice a week, but the family had to travel to Karratha or Perth on occasions to access other therapy services unavailable in their community. They hadn’t considered using telehealth for therapy prior to the pandemic because they didn’t know how effective it would be with a toddler.

“Sometimes Thea remained focused in the sessions online, other times her focus shifted. We believe this is due to her age more than anything. Overall though we’re happy and are now looking at doing telehealth more permanently for other services such as speech therapy because there’s not one available in our town,” Tahlea says.

When you’re moving from town to town on a regular basis, the need to find clinicians and have access to health services is even more difficult.

Adam and Maria Smith have been travelling the country for over a year with their two children. When their second child Levi was born with Down syndrome in 2019, they had to reassess their plans to hit the road.

“When we got all of the initial doctors checks when Levi was born, we got a lot of reassurance. They were all so supportive. We always asked the question if we should stay at home because of the issue around access to healthcare. But they all said, ‘Go on! Just do it. Why not?!’,” Adam says.

The couple made sure they had a paediatrician in Perth so if there were any problems on the road they could call them, and planned to be in Darwin at the six month mark so Levi could get all of the necessary checks again, then they continued on the road.

They hadn’t even thought about using telehealth until the coronavirus pandemic hit.

“We had been off the grid and out of reception for a while, and didn’t know how quickly the pandemic had progressed. So we were really surprised when we were travelling through Coffs Harbour in NSW things started to get serious like caravan parks and national parks closing,” Adam says.

The family managed to cross the border into Queensland just hours before it closed and stayed with a close friend near the Gold Coast. They had already stayed with him a few months prior, where they made initial contact with some therapists for Levi.

“We stayed in Brisbane for two weeks in February when the fires were bad, and met up with a speech therapist who suggested we could do online therapy,” Maria says.

Adam says that they still think therapies are better face-to-face, but when you don’t have the option to access clinicians it’s a great option.

“It’s also a lot more helpful as we don’t have to plan ahead so much now by calling up places weeks in advance to see if we can book an appointment,” Adam says.

“Even if you manage to get an appointment, you spend the first half an hour talking to tell them where you’re at, and then after another 15 minutes you leave and never see them again. Consistency of having access to the same therapists is important.”

Maria has also been utilising her connections with DSWA by joining the new parent’s group online.

Because they started travelling soon after Levi was born, she never went to a playgroup in person, but can now still build those connections online.

“Personally, I think it’s great because they do the songs with signing, so we can learn the signs and teach them to Levi one day. And it’s really nice to see other people in the same situation and have a bit of support,” Maria says.

“The Facebook group has been really helpful as well. Any time you have a question you just throw it in there and get a response. We’ve used it a few times, asking about the NDIS especially.”

Down Syndrome Western Australia Family Support Officer Nikki Schwagermann understands the importance of helping new parents connect with one another.

Once a term she runs the new parent morning tea, where people can come in to have a cuppa and a chat about issues like therapy. But up until recently this was limited to people who lived in Perth.

Nikki says she was really mindful that there are a ton of groups online for parents who have kids with Down syndrome, but the response from new parents was that there was still a need to have a group where everyone can connect, chat openly and receive that support from each other.

“Even thinking back to when I had my own son, the new parent morning teas were my lifeline. Everyone wants to connect with other parents and make friends with people who are going through the same thing as them. People who are living rurally probably want that even more,” Nikki says.

“Those connections make you feel like you’re not alone.”