When you’re the adult sibling of someone with Down syndrome, the lens you view your relationship through can shift focus as you both get older. Lucy Bain reflects on the changing nature of her relationship with her sister Emily, and often thinks about how this will continue to evolve in the future. 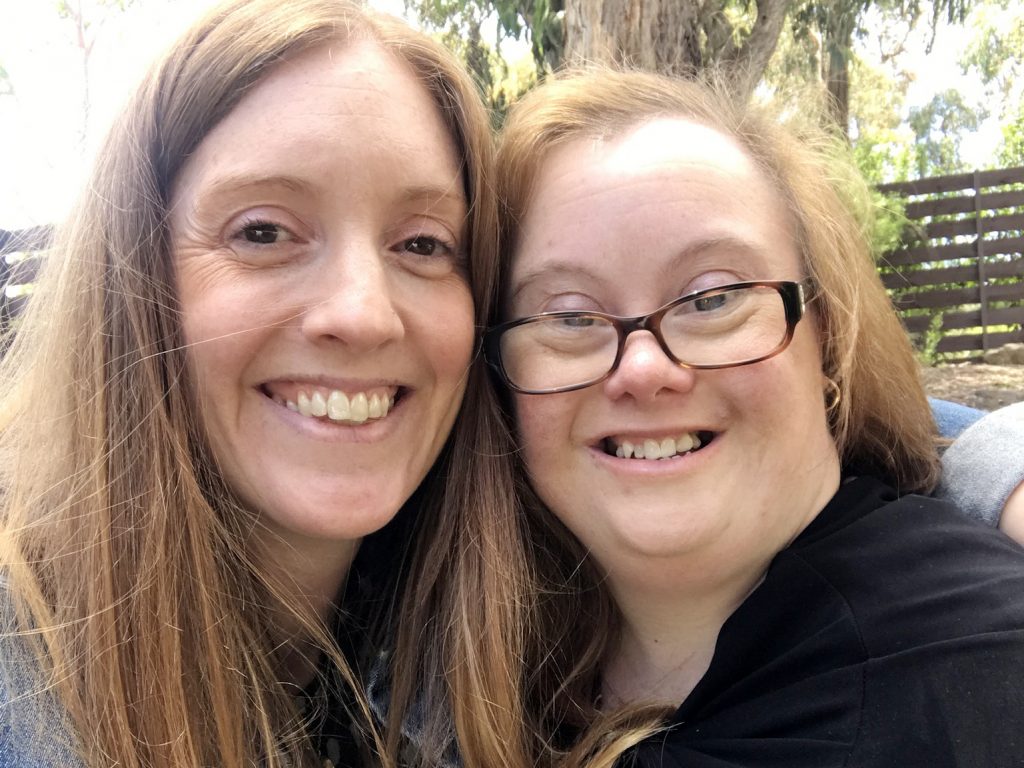 When we were small, I had no idea that what made Emily – Emily – would cause such a stir. To me she was Em, my sister, and I was proud of her. She annoyed me, teased me, chased me, played with me, and sometimes when we went out my parents would put one of those backpacks on her that had the leash attached. It was the 80s so we have to forgive them. That was the notable difference between us: she had the backpack, and I didn’t. I noticed that.

We have two younger sisters as well, each of us with our own intricacies and personalities. As a member of our bunch, Em didn’t really stand out. At least, not in a child’s eyes. To be frank, it took me a number of years to notice anything noteworthy about Emily. She was who she was, and still is.

I remember knowing that she did things differently to me, but there was no landmark moment where I thought, ‘What the heck is going on here?’ Perhaps this says more about my own observational skills than anything else. But in general, I find that’s what it is like for kids; even when difference is noted, it’s no big deal.

This ebbed and shifted as we grew up and, as teenagers, I experienced moments of pure horror when she did or said anything out of the ordinary, especially in public. These were also the days when I would walk five metres behind my mum if we were out at the shops, to give the illusion that I was on my own: the line between everything being fine and being completely mortified is thin when you’re a teen.

One day I remember having a friend over at our house and Em running around in circles shouting and being silly. The friend said, ‘What’s wrong with her?’ and inside I raged: at Em for drawing attention to herself, and at my friend for daring to question her in that way.

As an adult the lens has shifted focus, and with my husband and I both having siblings with a disability, the way I view our future has certainly changed. The weight of anticipated responsibility, of not wanting to get it wrong, is a constant friend.

The half-way place where siblings often find themselves is real – as an adult I often feel stuck somewhere between my place as one of the daughters of the family, but also playing half a hand in supporting my sister and my parents. Knowing a lot, but never enough to be initiated into the parent realm – simply having to be ready to be thrown right in there if, or when, the time comes.

I worked on a sibling project a number of years ago and it was then that, for the first time, I met some people like me. I soon learnt that not everyone had had the same run of the mill experience that I had growing up, that the sibling position in the family is complex.

It was the first time I had understood it in that context, and it speaks volumes for the kind of relationship I have with Em, and why it is so vastly different to the parent and child relationship that gets the most attention and support.

People are obsessed with knowing: am I a better person because I have a sister with Down syndrome? I had a conversation with a colleague recently about the fact that people with Down syndrome do not exist to make other people better people. It is not my sister’s responsibility to make me more compassionate, understanding, or patient, even though these traits may be natural repercussions of our relationship.

Asking this question is akin to asking who anybody might have been with a different family member or upbringing or education or culture: almost an impossibility to answer. Why it is only considered or asked freely when disability is involved is perplexing.

People often say how rewarding it must be to experience life alongside Em, or to work in the disability sector. What they don’t understand is there is no before and after for most siblings, no line etched in the sand, unless you were old enough to remember and even then, through a sibling’s lens things look different.

I can’t distinguish the sections of me that have been impacted by being ‘a sibling’, and there’s no previous me to compare to. All my sisters have helped shape who I am today. Haven’t the people in your life built who you are, too?