‘It’s me’ – a portrait of Martin Cahill 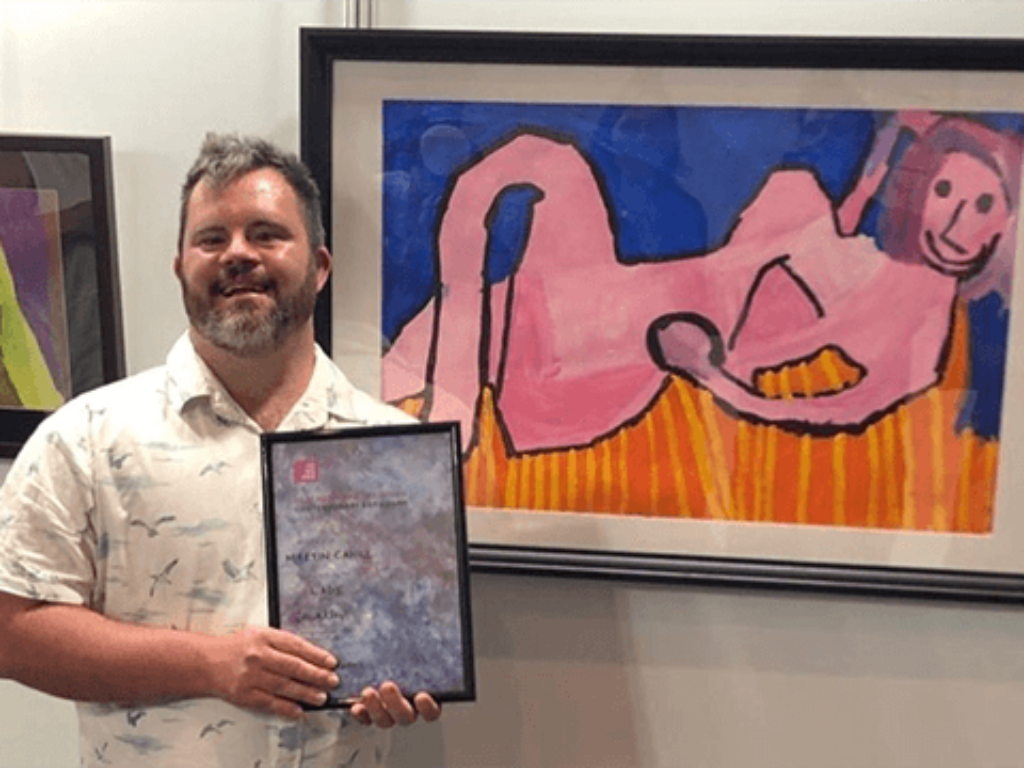 Martin is 31 years old and has Down syndrome. His father died 10 years ago and since that time he has struggled with anxiety and depression.  He has been painting for nearly five years. His mother first noticed how he seemed to enjoy doing a painting job for a friend when they were on holidays in NSW – just using the brush back and forwards. On their return to Perth, Martin started to paint with water colours in a sketch book – one painting a night. He really enjoyed this. It took quite a while to find an artist to work with Martin but eventually he began working with an artist friend called Nelson.

Nelson started Martin on acrylic paint and went from table to easel. They also painted some murals on the fences and bits and pieces around the yard, like the rubbish bin. Since then, Martin has had six mentors who have helped take his art from a geometrical and colourful style to the art he enjoys today – self-portraits, birds, scenery, flowers, and people. He loves painting with his mentors when they swap colours and take turns to paint.

When he chooses a picture or object he wants to paint, it is as though he filters what he sees and interprets that initially through detailed sketching of the form and then through his brush strokes and colours. Martin draws his interpretation of the piece, often colours in with crayons or chalk and then paints. His drawings are quite intricate but a lot of the detail disappears with the colouring in and paint! When this happens, his mentors can offer direction and prompts.

Martin loves drawing self-portraits and pictures of his Dad and some family members.
He also continues to draw on different mediums, like wood, husks off palm trees, jeans — anything his mother can find! He seems to like the variety.

Martin doesn’t speak a lot whilst he is painting. Sometimes he will get very animated out of the blue. He mostly shows his feelings by his facial expressions. He is very responsive to suggestions and questions like ‘What colour do you want now?’ or ‘What colours shall we put in the palette?’ He has hearing aids to help his communication, but he chooses not to wear them.

Over the past year, Martin has enjoyed going to Life Art where he is accepted as another artist in the group. He knuckles down, draws and colours in a style similar to Gustav Klimt, completing about three pieces a night. He doesn’t say a lot – he just enjoys being there.

Recently, he was visiting a friend who had bought one of his flower paintings and he recognised it hanging on the wall. He was very happy pointing to it saying, ‘It’s me, it’s me!’

He has exhibited in the As We Are Exhibition for four years with a High Commendation, a couple of People’s Choice awards, the Rosalind Lewis Award and the Contemporary Art Award.

Martin also exhibited at the Linton and Kay West Perth Gallery in February 20–23, 2020.