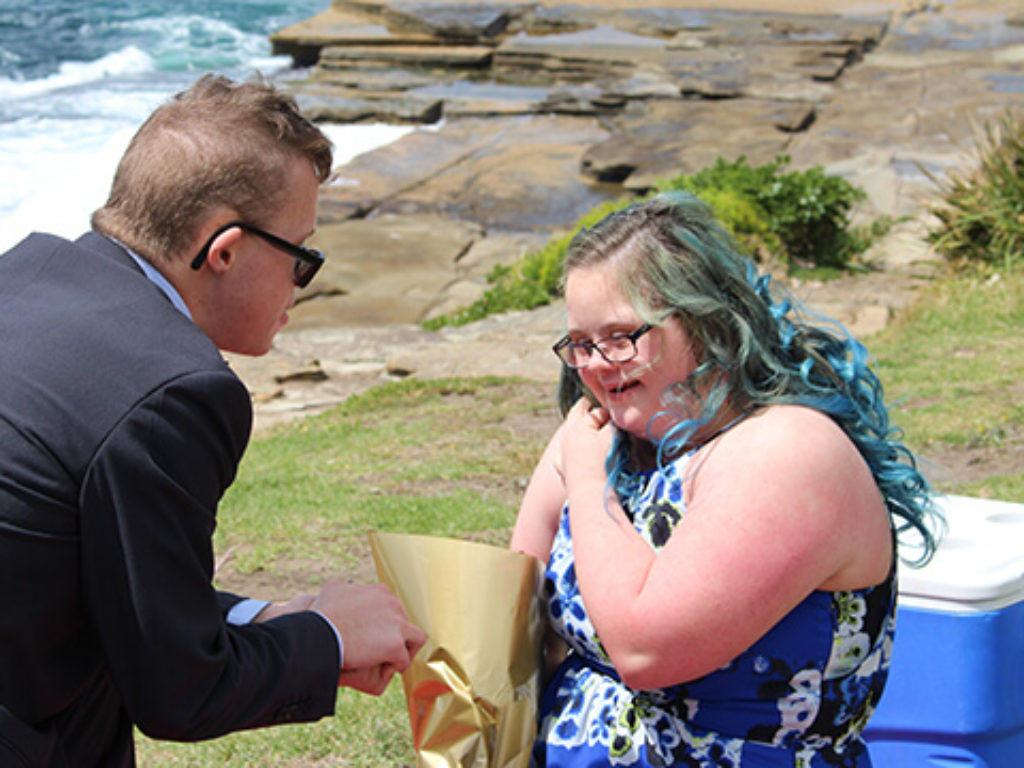 by Mitch Carlin and Jacqui Bickley

Our names are Mitch Carlin and Jacqui Bickley and our story began when we were only 5 years old. We met when both our parents enrolled us into an early intervention program. Our mothers, Robyn Black (Mitch’s mum) and Tracey Bickley (Jacqui’s mum) instantly become friends, and so did we!

Our friendship blossomed from there. We would have regular play dates, alternating whose house we would stay at and would have fun playing in the playground at MacDonald’s stealing chips from each other’s meals. As we got older, our MacDonald’s dates didn’t change.

Jacqui: “I just loved spending time with Mitchell and calling him my best friend, but sometimes he would steal too many of my chips.”

We attended different schools, however that still didn’t stop our friendship. We continued to see each other and call almost every day.

Mitch: “Sometimes we would call each other twice a day, and I would always send her funny messages to make her laugh. When it was my Year 12 school formal, I asked Jacqui to be my partner and she said yes!”

Jacqui: “I was so excited he asked me, I couldn’t wait to get my hair and makeup done.”

After the formal we both made the decision to become boyfriend and girlfriend.

At the moment we are both 23yrs old. We linked into an organisation that helped us spend more time with each other.

Mitch: “Every Monday I get to hang out with my two favourite workers (Luke and Emmalie) and my girlfriend.”

Jacqui: “Our workers take us to fun day trips and help us orgainse our date days.”

Mitch: “Jacqui had been my friend and girlfriend for a very long time. When my sister got married to my brother in-law last year, I knew that’s what I wanted to do with Jacqui. I asked my workers Luke and Emmalie to help me plan the perfect proposal for Jacqui. My mum and Jacqui’s mum kept the secret from Jacqui so it was a big surprise!”

On Monday the 28th of October a picnic was set up ready for the proposal.

Jacqui: “I had no idea what was about to happen, I was just told we were going for a picnic for my worker’s (Emmalie) birthday. When I got to the top of the hill that overlooked the ocean, I saw my honey bear (Mitch) standing there with roses in a suit! I was so happy I cried. He took me over to the picnic he had set up and sang one of our favourite songs Marry You by Bruno Mars, and that’s when he asked me”

Mitch: “I got down on one knee and sung to her and asked the question.”

Jacqui: “Of course I said YES!”

We are so excited for what’s to come.

Jacqui: “And I can’t stop looking at my ring and showing it off, but Mitchell thinks he is the one choosing my dress.”