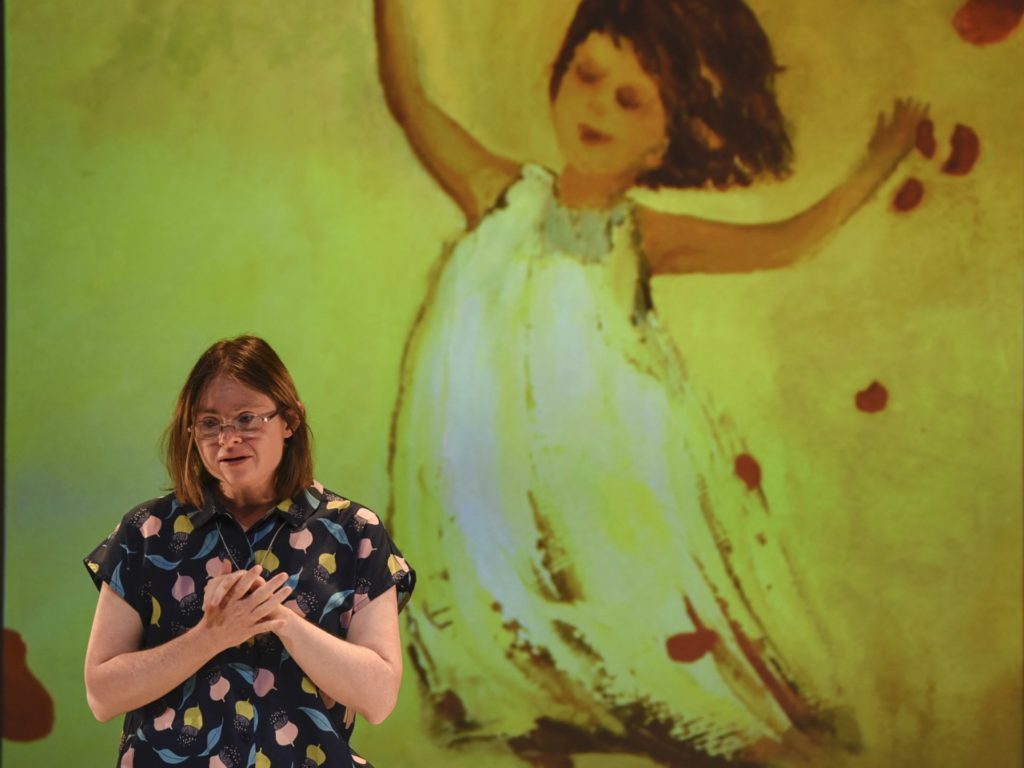 Julia Hales writer/star of You Know We Belong Together delivered an incredible keynote speech at Meeting Place forum in Alice Springs in 2018. Julia speaks of the research into the history of Down syndrome she conducted while writing the play.

The full speech is a must-read!

Hi everyone. Welcome to my keynote, TOGETHER WE BELONG. I’m Julia Hales. I am 38 years old and did I mention that I’m still single?

They had some characters with disabilities, but they were actors pretending to have a disability. The people that I wanted to see were the people who really had a disability. Who hadn’t been on TV.

I saw Forrest Gump. I know Tom Hanks was really good, but it is really sad they didn’t have a man with intellectual disability playing that part.

I was so used to seeing actors without disabilities playing disabled characters and this movie made me think, ‘well of course we can be in a movie like that’.

In 2012 I got involved in a program called LEADERS FOR TOMORROW.

I learnt to be a better leader. I saw myself as a leader before that program. Helping other people with disabilities to lead independent lives. I spoke to groups such as the Down syndrome association playgroup parents. Helping the community by being an advocate for other people with DS who found it hard to self-advocate.

In 2015 I did the Australia Council for the Arts’ SYNC Leadership program and I got to meet other artists who shared stories about their careers. We did a lot of exercises because they gave advice to us about visioning our careers, dreaming big and setting goals.

The coaches worked with us one to one to see how we were progressing. They found ways to help each of us understand that our careers were like a journey. My career was me, on a horse, riding freely. They asked me ‘where are you now on your horse?’

My mum had passed away three months earlier and that was very tough that year. I thought, ‘I’m not up for this’ but it was good for me to focus on other things in my grief.

When I got back to Perth after SYNC, I went straight back to DADAA and told them all the stuff that I’d learnt. I was very clear what I wanted to do. I wanted to change the world to make it better and to make a difference.

I wanted to help other people with all sorts of disabilities to experience the same thing I had with SYNC. I wanted them to get clear about what they want in their artistic careers.

This is when I started to get really serious about the Down syndrome community and began my research with other people and artists with Down syndrome. I wanted to find out about love in their lives.

I wrote down questions like: Can you tell me what love means to you? Do you think love and sex go together? Where do you find love? Does the world need more love?

I worked with DADAA’s Digital team to do some of the filming of the interviews with Patrick Carter, Tina Fielding and Lauren Marchbank.

I interviewed in March 2016 and then edited with Lincoln McKinnon. The FINDING LOVE interviews were screened as part of DADAA’s Digital Dialogues project and the project actually started!

DADAA supported me to apply for MEETING PLACE’s pitch to Producers in March 2017. I also screened the FINDING LOVE interviews as part of MEETING PLACE 2017.

I applied for a creative development grant to the Australia Council for the Arts in February to collaborate with writer, Finn O’Branagáin to research and write FINDING LOVE.

I was working with the Jenny Sealey workshop and meeting new artists from around Australia. At the same time, I got to sit down with Wendy Martin, Artistic Director of the Perth Festival. She told me that she saw my FINDING LOVE interviews and that she loved them. She told me about moving it forward and that’s when she introduced me to Clare Watson from Black Swan State Theatre Company.

We decided to have a meeting and talked about the things that I liked about my dream and the FINDING LOVE interviews.

We decided to work together as a team. I still couldn’t believe that Clare wanted to be involved in my play. That my play would be directed by her as part of the 2017 Perth Festival. A co-production between DADAA, Black Swan State Theatre Company and Perth Festival!

We changed the title, FINDING LOVE to YOU KNOW WE BELONG TOGETHER, the theme song for Home & Away.

In July 2017 I began working with Finn O’Branagáin. We worked for five months to develop the script. As part of that five months we researched the back history of Down syndrome and how people with DS were treated in two hospitals in Fremantle and Claremont.

It was very sad. They had newborn babies with Down syndrome that they let starve to death. Headphones to electric shock their brains. When the parents decide to give their baby up, they put them in the Fremantle asylum where they all lived together in one place. So that means that they got locked up.

When I found out I was so upset. It really destroyed me how they did that. I couldn’t stop thinking about it. I couldn’t believe how they treated them. Like that. And the family should have stuck up for them and fight for them to get them out to make sure they could live their life the way they wanted.

It still makes me upset. It’s in the past but I don’t want it to happen ever again!

I included this fact in the play to let people know that I, a person with Down syndrome, had only just discovered that this was the way people with Down syndrome were treated. They shut down the Swanbourne Hostel in Claremont just before I was born in 1980.

I was upset and angry that they didn’t have babies with Down syndrome in Iceland.

As a woman with Down syndrome…if I wasn’t born and my parents were pressured to terminate, I wouldn’t have been born.

They celebrated when I was born. My life has always been celebrated by my family.

These were two pieces that I researched stay with me. I couldn’t change the past, but I can change the future by showing this to the audience.

People need to learn more about Down syndrome and other ways of living and I’ve been able to do that through YOU KNOW WE BELONG TOGETHER.

We also researched the first doctor to find Down syndrome was Dr Langden Down. He built a theatre to encourage people with Down syndrome to act on his stage, dance, make the sets.

I was joined in my play by six other artists with Down syndrome who brought their stories to mine. Four of them were artists I knew Tina Fielding, Patrick Carter, Lauren Marchbank and Josh Bott. I met a married couple, Mark and Melissa Junor who came up from Augusta to do the season.

They, other creatives such as Rachael Dease for sound and Michael Carmody for audio visual and all the production partners had to work together with me to make our show happen.

Working together with industry professionals was really exciting for me and my fellow artists with Down syndrome.

DADAA supported my growth as an artist and development of my artistic voice. 20 years of development was pulled together in 2015 during SYNC and after my mum passed away. They helped me make filmed interviews, apply for grants and matched me up with amazing mentors such as Finn O’Branagáin, Zoe Martyn, Lincoln McKinnon and Laura Boynes who was also in the show with us.

They also helped me to connect with Perth Festival through their four-year partnership.

I now have individualised funding and continued to be supported by DADAA to continue professional development opportunities such as making a show reel, working with mentor/s to develop new work and helping me to write and present at conferences such as Meeting Place.

Anna Reece and Wendy Martin from Perth Festival were so supportive of my vision as an artist and I am so grateful I filmed my interviews, so they could understand what I wanted to do.

The best thing about me being in the Perth Festival it really helped my career to shine and to achieve everything in this play at all the work I have done it pay off and I am so proud of this play and I love Down syndrome community and I love my community. To let everyone know that made a difference in this world to change the world to make it better to live in that’s why love being part of the Perth Festival.

Working with the BSSTC has taught me a lot of things about directing, sharing…

Working with a major performing arts company or an MPA and inviting six mates to introduce themselves through my story was great. Working with professional artists associated with that company was a dream come true.

BSSTC organised a trip to Sydney to make my dream happen on Home & Away. I did filming with Ray Meagher. It was a bit like playing Claire Stewart, a character I created for Home & Away.

When I finished the play, I changed. I see how the future will be.

Since YOU KNOW WE BELONG TOGETHER was part of the Perth Festival, BSSTC negotiated with DADAA to have some of my working time at BSSTC every Wednesday for their Artistic Programming meeting.

On August 27, BSSTC launched their 2019 season and asked me to present with another actor/writer, Ian Michael. They also announced a return season of YOU KNOW WE BELONG TOGETHER in March next year!

I have changed since 2015. I see completely different. To live the fullest and really enjoy it as much as we can. I love the whole progress that I have achieved in my life.

To see the research that I’ve done, the whole experience.

The research was the most powerful. When I look back on the history of Down syndrome and they used to get treated. I said to myself ‘We can’t see this happening again’. I know I can’t change the past, but I can fix the future.

My next project is to work with Chris Kohn from Melbourne. He is a theatre maker and he asked me to come over to work with him in his theatre. To meet new people and to make work about screening for Down syndrome as a documentary theatre piece.

I’m also a research coordinator for the Experience Collider project to work with the Telethon Kids Institute and 20 young people with high support needs. My role is to ask them questions about the project activities, helping to work out how performance and the arts in general contribute to quality of life.

I’m working with another performance maker to create new work. Stay tuned for more on that front!

You can see Julia speak about her project on the ABC website and on the Today Tonight Facebook page.

You can also find out more at the links below: