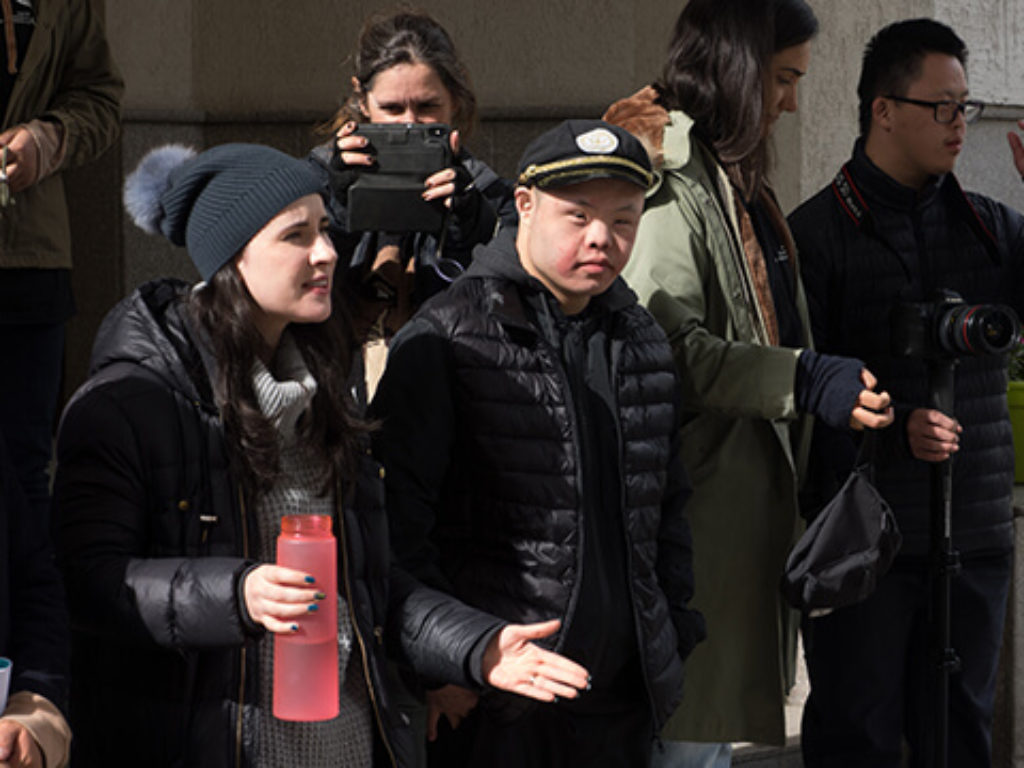 Bus Stop Films has been an inclusive film making company for over 10 years and developed an Accessible Film Studies Program for students with a disability. This 40-week program teaches tertiary-level film studies subjects where the students, are involved in every aspect of the filmmaking process. Genevieve Clay-Smith is the co-founder of Bus Stop Films who took the program to Mongolia and convened an inclusive film crew resulting in the production of the film Stairs. Here she explains the project:

‘In 2017 I was introduced to the executive director of the Arts Council of Mongolia Ogie Odonchimed who expressed an interest in our accessible film studies program. She told me that there were no opportunities for people with disability in Mongolia, and there was certainly nothing like our program in the country. So, we began to make plans to produce our program in Mongolia and explore what the program’s impact could be, which resulted in the production of the film Stairs.

On my first trip in 2018, I met various people with Down syndrome and their families through the Down Syndrome Association of Mongolia, and I learned about the segregation of people with disability in the country. It became clear the country was 40 years behind the disability rights movement which emerged in the 1970s.

People with intellectual disabilities are largely excluded from finding employment in the open market. Down Syndrome Association of Mongolia is seeking to challenge this, so they devised a vocational education and training program for their members with Down syndrome to learn how to work in hospitality.

I saw that our program could help people with disability increase their literacy skills, social skills, work-ready skills and wellbeing, as well as empower them to tell stories about disability and change attitudes in Mongolian society through representation. We see our way of life on display within our cinematic stories. There is no doubt in my mind that we can improve human rights through the stories that we tell.

Our film Stairs explores the issues of access and barriers to open employment for people with disability. It is a nightmare to get around if you use a wheelchair or have any kind of physical disability in Mongolia. Stairs explores the life of Sonor, a man who uses a wheelchair and who lives in the ger district (Mongolian tent city). His dream is to get a job but people’s attitudes and the physical world he lives in creates challenges to him achieving his goal.

Our crew was made up of around 17 students with intellectual disability, 12 of which are people with Down syndrome. We also had professional mentors from the Mongolian film industry and a student from the local Mongolian film school who worked on the film and who taught our students in the process, making the classroom environment and film production inclusive.

Byambasuren Gantsogt is 22 years old and part of our crew. He says, “In 2016, I did graduate from high school and got my graduation of diploma. I worked on ‘Stairs’ short film as a set assistant and assisted teacher Genevieve. This film shows that people with disability can achieve what they want when they are determined. Film also raises issues on lack of accessible roads, buses and trainings, schools dedicated for people with wheelchair. My role was to be a producer’s assistant and I’m very glad that I did complete my work in a very nice way. Working with teacher Genevieve was very nice. Even if there was a language barrier, we understood each other. And she is always smiling. I want to thank teachers Gerelee and Onondorj but more specially teacher Gen for teaching me many things.”

I have been facilitating inclusive films sets for 10 years and I see the same benefits time and time again: inclusive crews shape a positive culture. Typically, the film industry is extremely hierarchical, yet on an inclusive filmset, everyone becomes a teacher as people with and without disability are learning from each other. People feel that there is purpose behind what they’re doing, they’re not just serving an auteurs vision. The way in which we are making the film and how we treat people is just as important as the end result of the film. And that is a very different attitude to how the industry has traditionally operated.’