Sophie is a TV star 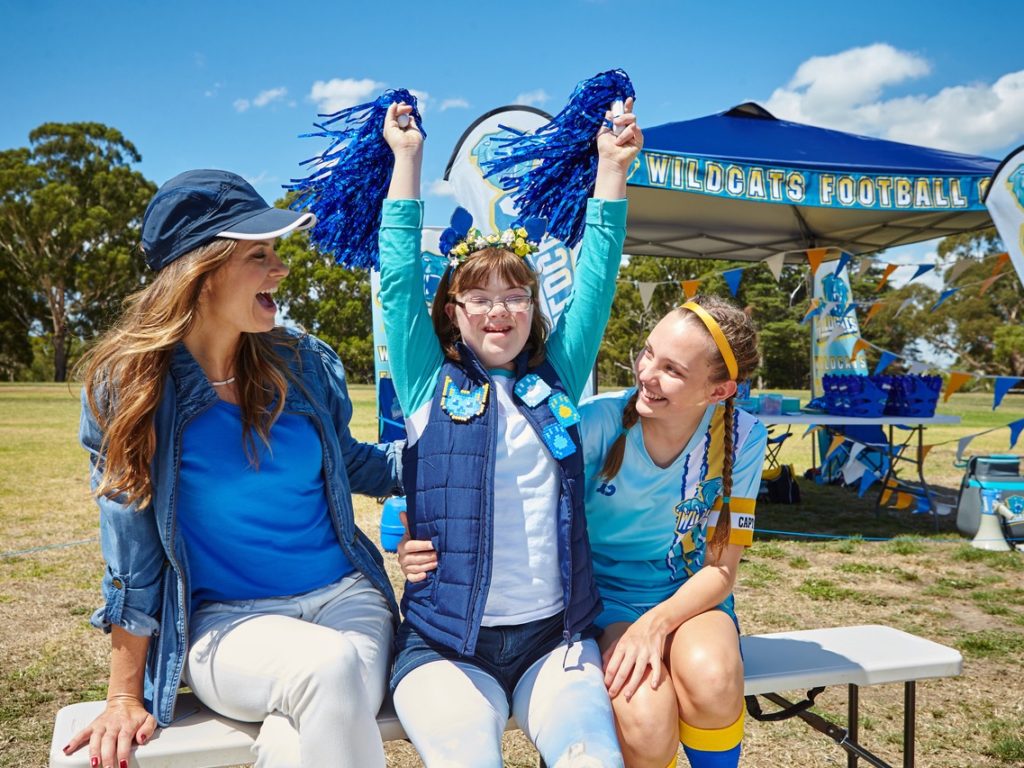 In January 2017, Sophie embarked on an unexpected but exciting journey!

I loved Mustangs because I loved getting my hair and makeup done. I made some great new friends like Danni, Christie, Tash and all the cast and crew. It was lots of fun working on Mustangs. I said some funny lines in Season 1 like ‘Mustangs on toast!’ and ‘Mustangs are going down!’ which were lots of fun to say. I really loved the food on set! Some of my favourites were fruit toast and eggs and ice cream at lunch time. I was fitted for lots of costumes and got to keep some props like head bands and pom-poms – my favourite!

I responded to an advertisement from Down Syndrome Victoria regarding the upcoming role of Summah in a new TV series about a girls’ soccer team, Mustangs FC. I sent in Sophie’s details and as a result, she was called for an audition with a casting agency. After the audition, we were informed that Sophie was successful! Filming began in February 2017 in different locations around Melbourne – with extremely early starts! Sophie was quick to fit in with the cast and crew and it was obvious that she was going to be embraced by all around her from day one. Her vibrant, friendly and hilarious personality suited this setting perfectly!

In 2018, we were very excited to learn that Mustangs FC would be going into a second series and that Sophie’s role would be continuing. Series 2 required more days on set and more screen time for Summah. This season, a challenge for Sophie was the storyline. It saw Summah’s sister’s team, the Wildcats, lose some matches. As Sophie is a very positive person who sees everybody equally, it was tricky for her to understand there were winners and losers. She just wanted everyone to win and be happy!

During our time on set, she got to experience the many aspects of filming behind the scenes and in front of the camera. Plus, we were given the opportunity to educate others about Down syndrome and answer lots of questions that were asked. It was great for others to see how capable Sophie is and realise that she is more alike than different to her peers. I am proud that Sophie can be a representative of people with Down syndrome in the media, proving that they can and should be given the same opportunities as anyone else.

We wanted to include a character with Down syndrome in Mustangs where that character (Summah) was included in our representation of all kinds of girls in the world today. Where Summah was not defined by having Down syndrome but defined by her character, like any other on our show. She was written as the cheeky little sister to Michaela and often vocal offsider to Wildcats coach Mum, Terry. We wanted Summah to have the same distinctive, complex, unique, vulnerable, strong character traits of any of our young women.

Casting Sophie meant we could push Summah’s cheekiness and humour because Sophie’s comic timing is very good. She played brilliantly off Christie Whelan-Browne as Terry and Tash Pearson as Michaela. It was particularly great to see Tash react to Sophie as she would any, sometimes annoying, little sister. It was very truthful and real.

Our show’s mantra is as Geena Davis said, ‘if you can see it you can be it,’ and we think it’s important that all girls see their dreams being lived out on TV, as well as in real life.

Sophie was a delight to work with, she was sharp and funny and brought much joy to the days she was on set. It was nice to see her working alongside cast and crew as if she’d always belonged in our filmmaking community.