Joe carves up the waves 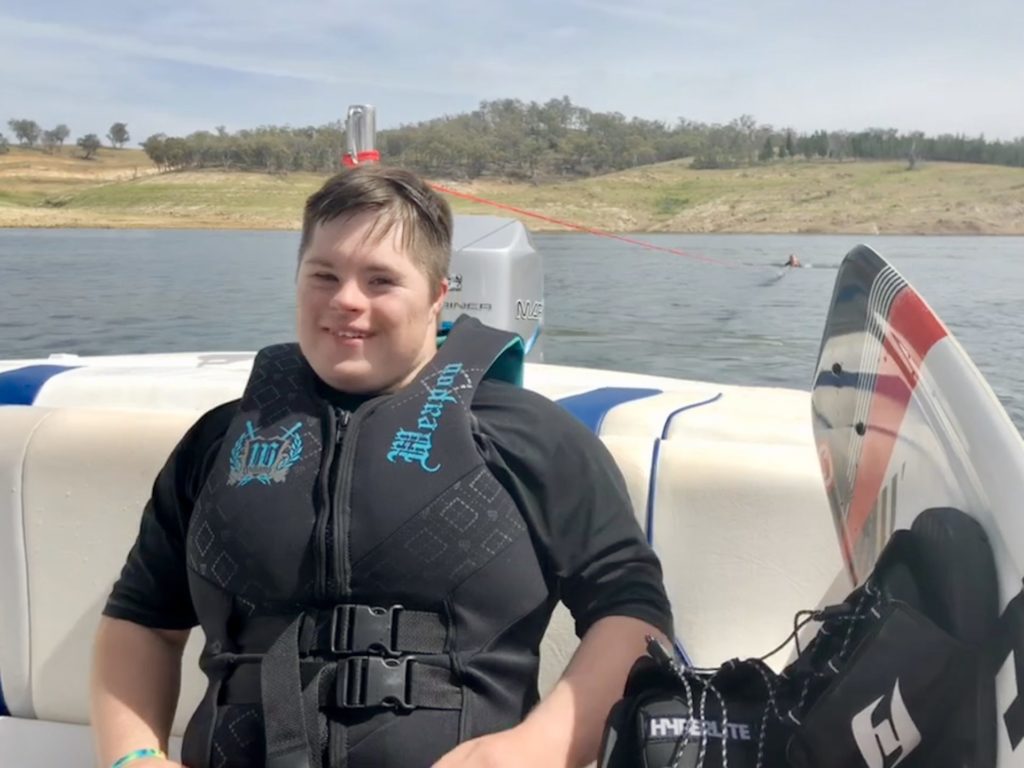 I’m proud that I can wakeboard.  I love to wakeboard behind my dad’s boat and do tricks.  I like to do it with my friends, Guy and Tim and my cousin Josh.  We all wakeboard together. I really like being with my friends and having fun.

Joe’s parents Maree and Anthony have always enjoyed water-skiing during summer.  Joe and his sisters Tess and Eva have spent many hours in the boat and being towed behind the boat on a large inflatable.

Joe watched his sisters learn to ski but it took him some time to get the courage to try.  When he was nine years old, he asked if he could have a go.  Dad was driving the boat and mum held Joe in position in the water, while Uncle Bill in the boat held the other end of the rope so he could let go if Joe fell over. Which he did – a lot! It took many attempts over a few summers but by the time he was eleven, Joe was up and water-skiing.

As he grew older and became larger, he became too heavy for a person in the boat to hold the rope for him, so Joe graduated to knee-boarding instead. He is one of the best kneeboarders in the group of family and friends and loves flying up over the wave the boat leaves in its wake and doing tricks.  He especially likes to spray people if they are being towed on a second knee-board next to him.

A few years ago, he was ready for a new challenge. His friends Guy and Tim, and his cousin Josh were learning to wakeboard and encouraged him to try. It took lots of time, attempts and encouragement but after a while he was able to wakeboard just as well as the other guys and now, they sometimes tow two wakeboards at a time. He can now wakeboard for quite a distance and likes to show off his style to people on the shore. It’s great for him to be skilled in something that others can only dream of doing and his family are proud of him for having a go and sticking with it until he was successful.

Watch Joe tearing it up on the water: