By Down Syndrome Victoria 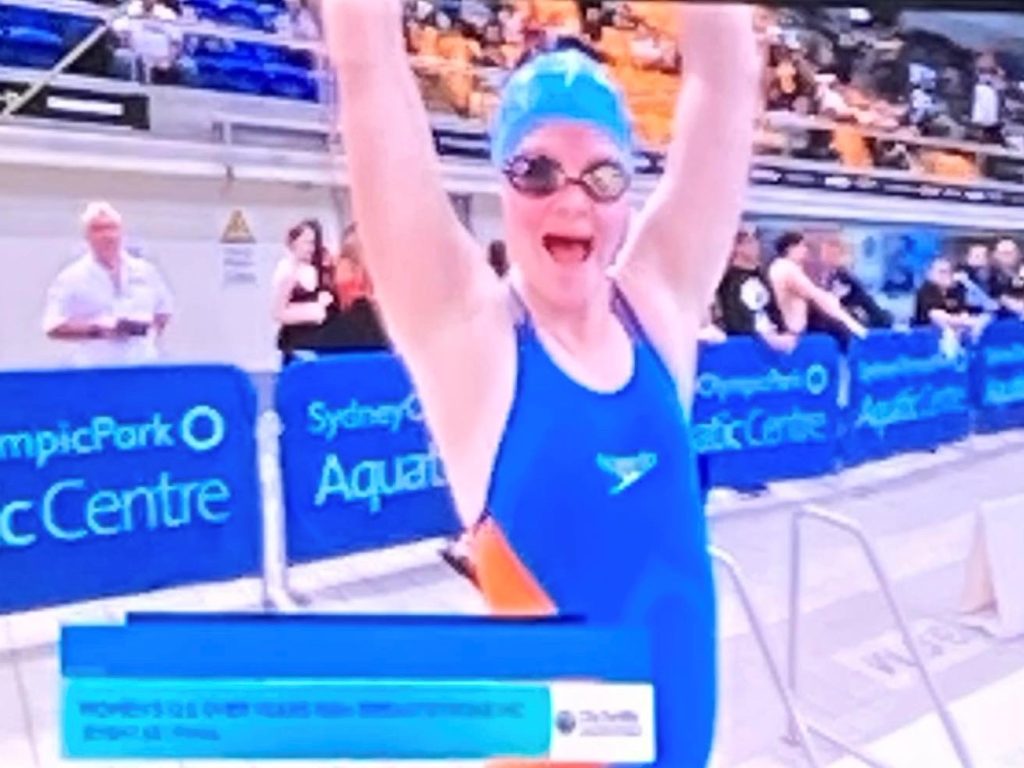 In late August, Phoebe Mitchell swam in the 100 metres breaststroke event for a Multiclass swimmer at the 2022 Australian Short Course Championships. Earlier this month, DSV’s Communications Officer Pammy Meyers caught up with Phoebe’s Mum, Libby Mitchell, over email to talk about all things swimming and categorisation!

What was Phoebe’s pathway into sports/swimming?

Phoebe commenced swimming as a toddler, loved it and has not stopped since. In primary school, Phoebe also loved athletics and participated in Little Athletics until she was 15, cross country running and netball and represented her primary then secondary schools in the regional, zone and state competitions. She has continued to run but for enjoyment only.

At that time there were limited pathways for any athlete with a disability, but the swimming pathways for those with disabilities was further advanced. Knowing the benefits of swimming for all people, but especially for those with reduced muscle tone and some other associated health issues, she joined Geelong Swimming Club and started to train in a squad setting, a journey that is still going, some 24 years later.

What’s the experience been like for Phoebe to swim competitively?

Phoebe has been a member of the Australian Down Syndrome Swimming Team since 2008, competing for Australia in Portugal, Taiwan, Italy twice, Mexico & Canada during this time. She has also competed for Geelong Swimming Club at local, country, state and now national championships.

Her absolute love of all things swimming includes having awesome swimming friends and lots of togs, to thriving on training and racing, to breaking world or national records and having wonderful opportunities to travel.

Competing is a natural and enjoyable experience where her simple desire to do so entirely dictates her continued involvement.

What did she participate in at the 2022 Australian Short Course Championships?

Phoebe swam in the 100 metres Breaststroke event for a Multiclass swimmer.

She swam a recent personal best time in the heat, a little slower than her existing world record, and made the final, coming in 6th.

S18-significant other impairment: how do the categories work, when were they introduced and in your opinion, has it increased opportunities for people with Down syndrome to participate?

(Some of the following information is taken from the Swimming Australia website and Paralympic.org.)

Multiclass Swimming refers to the competition structure for swimmers with a disability.

A swimmer is firstly determined if they possess an eligible physical or intellectual disability, (or both, as is the case with Down syndrome).

The classification process whereby a swimmer is placed in a certain category, is governed by Swimming Australia and overseas by their respective bodies. It allows for swimmers to compete in fair or meaningful environments by grouping swimmers together according to the impact of their disability or their ability to compete in the sport of swimming.

There are now 19 classes in the Australian swimming classification system, S1 to S19, catering for a wide range of disabilities.

Historically, swimmers with Down syndrome swam under the S14 category, which is for swimmers with an intellectual disability. Obviously, competing against swimmers who may not have a physical component to their disability, did not provide an equal playing field. Whilst this has been recognised for many years, it has taken years of testing and a determined and consistent approach by Sport Inclusion Australia (SIA) and Down Syndrome Swimming Australia (DSSA) to prove that swimmers with Down syndrome do possess a physical component in addition to intellectual disability, and should subsequently compete in a category of their own, (along with like syndromes) and thus S18 was born in late 2021.

There are qualifying times to be attained to enter a Multiclass event, just like for other athletes.

As S18 is a new category, the qualifying times for the recent 2022 Australian Short Course Championships were extremely difficult or fast and subsequently only one swimmer, Phoebe, qualified for these championships and only in one event. Whilst this was exciting and a progressive step for all swimmers with Down syndrome, it is hoped that in time when these times are examined around Australia, the qualifying standards are lowered to allow more participation at this level.

At the completion of each Multiclass event, the final placings are determined by which swimmer is closest to the world record in that particular category. Categories S1-S14 have many years of proven Paralympic records within Australia, so the calculation is simple. However, S18 has had their world records ratified by Down Syndrome International Swimming Organisation (DSISO) which are not at this stage recognised by Swimming Australia, despite having been attained, ratified and collated since 2002. Because of this, the world record time used for the calculation of Phoebe’s sole event, was heavily weighted so any swimmer in that category would not take a medal away from a Paralympic swimmer, but noting that in time this would hopefully be reviewed and adjusted accordingly.

It is hoped that more young people with Down syndrome take up the sport of swimming. The friendships made are lifelong and the benefits for health and strength are insurmountable.

There are many local swimming clubs who are active in inclusion of swimmers of all abilities. Swimmers with Down syndrome in particular now have a positive and developing pathway within Australia and it is absolutely hoped that these opportunities will enthuse many more.

How did Phoebe find the experience, competing at the SA National Championships?

I had an amazing time. I caught up with some friends from around Australia that I met at the INAS Global Games in 2019, and some Paralympians. I also met Olympian Kaylee McKeown, she was lovely and talked to me. It was really special to swim in the Sydney Olympic Park Aquatic Centre. There were so many seats around the pool, it was amazing.

Libby and Phoebe’s thanks go to all those around Australia as part of Swimming Australia, SIA and DSSA who have worked so hard to provide a satisfying and fulfilling platform upon which a swimmer with Down syndrome may finally compete fairly.

DSV is currently working with Sport Inclusion Australia (SIA) on the Get Active More Often project aiming to increase opportunities for people with Down syndrome to participate in sport.