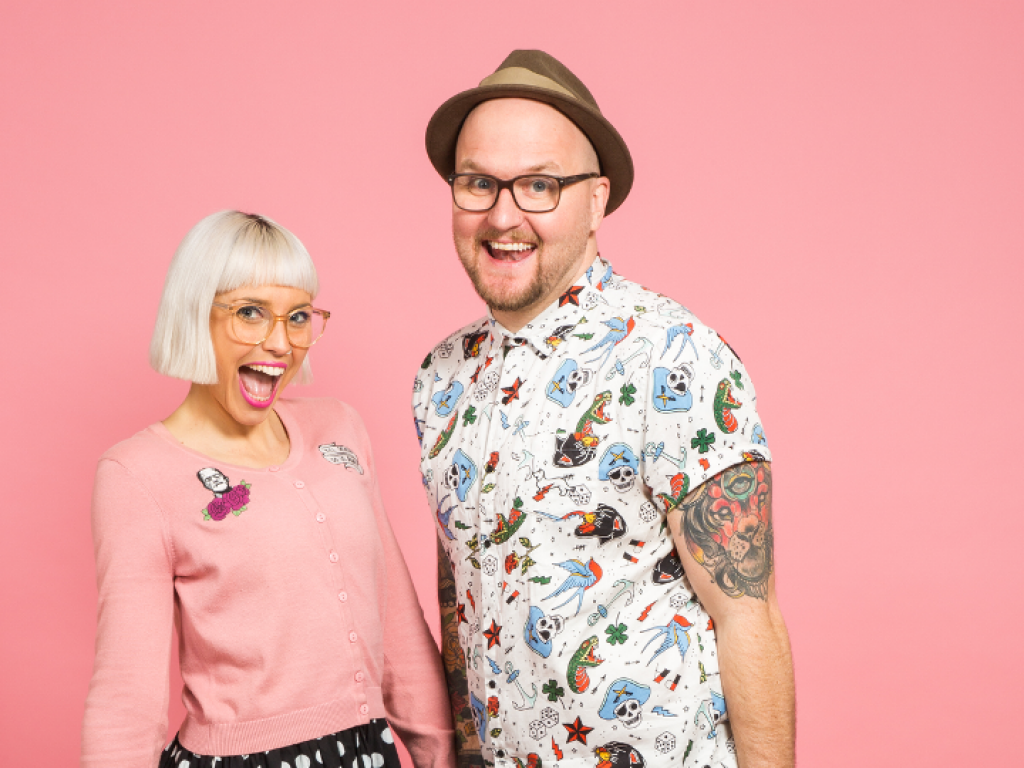 Meet the Ambassadors for #21YourWay 2020

During October take part in the 2020 #21YourWay challenge, supporting people with Down syndrome around Australia.

Are you all set? Scroll down to find your favourite Ambassador and follow the prompts to join their team.

This year our #21YourWay Ambassadors are:

Most recognizable from his recent adventure with wife Maddy Tyers on the hit reality TV show Lego Masters Australia, Jimmy Eaton is an actor, comedian, content creator and voice over artist. The man is a dynamic, versatile live comedy performer and writer with one of the sharpest minds on the scene, wowing fans throughout Australia, New Zealand, United Kingdom and Japan.

Based out of Melbourne, Maddy Tyers is a rising star of Australian stage and screen. As an actor, presenter, children’s entertainer, voice-over artist and writer, Maddy’s list of accomplishments continue to grow. Maddy has appeared in a host of Australian TV series’, short films and features including Border Protection Squad, Neighbours, Back In Very Small Business and City Homicide but is best known for her supporting lead role as Amanda Tucci in the hit kid’s TV series, The Elephant Princess.

Maddy and Jimmy will be creating a multitude of Lego creations to raise awareness and funds for Down Syndrome Awareness Month. If you want to have fun with Lego, join in with Maddy and Jimmy!

Dan & Steph love food + family. This down-to-earth Hervey Bay couple are serious foodies. Winning the fourth series of Australian ‘My Kitchen Rules’ in 2013, and Grand finalist in MKR The Rivals 2020.

Dan & Steph have two restaurants in Hervey Bay, their own sausage range in Coles nationally & a miracle IVF little lady who keeps them on their toes

Life’s busy but they love what they do. Family food & fun is everything!!!

By joining Dan and Steph’s team you will be creating recipes and learning how to cook them in 21 seconds – all while helping spread awareness about Down syndrome.

My name is Kath. I am an artist, I love drawing and painting, I love abstract and landscapes. I love creating art challenges. In the month of October we are celebrating Down Syndrome Awareness Month, the talent and skill of people with Down syndrome and we are doing activities and challenges. My challenge is “Art in 21 days”. For 21 days I am going to give 21 art challenges.

Please join Team Kath and paint along with me. I will be sharing prompts each day! If painting is not your thing then you can also help by making a donation through my team page. It only takes a minute and any money you can give (no matter how large or small) will go a long way to helping us reach our target.

Hello, my name is Phoebe Mitchell and I am 28. I live with my mum, Libby and dad, David and dog, Billy, in my own separate wing of the house on the Surf Coast. I also have a brother Ed. My passions are swimming and keeping fit. I do swimming training with Geelong Swimming Club and I am a member of Down Syndrome Swimming Australia. I have met some wonderful friends through swimming from Geelong, in Australia and around the world. I have represented Australia in swimming since 2008 and I have broken a world record about 80 times and I currently have 15 Open Women’s World Records. I also really love catching up with my friends from Encompass, especially my boyfriend Sam. We have been together for about 8 years. I love music, watching TV and holidays too when I can. I still exercise every day even though I cannot swim very much at the moment. I run around our paddocks and do my own workouts at home.

Phoebe will be setting an exercise challenge every single day in October, so if you want to get your body and mind ready for summer join in with Phoebe!

My name is Steve Canning. I’m a halftime employee at Woolworths for 18 years and full time Artist.
I live independently in South Gippsland. My art is heavily influenced by Stan Lee.

Steve is going to be painting his way through his favourite 21 Marvel characters in October and invites you to join in!

Matt has been a dedicated DSV advocate for a number of years; representing DSV on the Down Syndrome Advisory Network (DSAN), volunteering and speaking at a variety of DSV events. Matt is now also working for DSV on a casual basis, to help establish our advisory group, including the recruitment and onboarding of fellow advisory group members later in 2020. Matt is also involved in other paid employment opportunities that present throughout the year at DSV.

Matt loves to start good conversations and create awareness! Please join team Matt in answering a question a day about yourself for 21 days during October.

I believe in always having a positive attitude and I try to do the things I can do to the best of my ability. Teamwork is important because the best outcomes for the Down syndrome community happen when everyone is working together.

Join me as I bake 21 cupcakes to share with my work colleagues. I love my job as an office administration assistant at the Queensland Children’s Hospital School. We are all part of a very supportive team. The cupcakes will be to say a big thank you to all the wonderful and dedicated people at the school. It is very important to recognise the people that support us, enabling us to live happy and fulfilling lives.

Keep smiling, have fun and join in the celebrations as we journey through Down Syndrome Awareness Month.

Hello, I’m Ethan and I’m 20 years old. Originally from Sydney, I moved to the Gold Coast when I was 8. I live at home with my mum, dad, two younger brothers and our dog Willow. I work part-time for the Gold Coast Titans as the Chief Morale Officer, working both in the office and on the field. My favorite things to do are hanging out with my mates watching the footy, listening to music/dancing, and visiting my Nan and Pop.

My challenge is ’21 things to make you smile’ for Down Syndrome Awareness Month. I’m really good at making people smile and hope you’ll join me on my journey to make others smile, raise awareness and help raise funds for the Down Syndrome Federation.

Hi I’m Michael, I am 29 years old and I am a (retired) Champion swimmer. I work in Brisbane City and have starred in a couple of movies including the recent Dora movie. For my #21YourWay challenge I am doing a 21 Healthy Days challenge where I will eat healthy, go to the gym and be the healthiest I can be. So please get behind me and support me in this challenge for #21YourWay.

Hi I am Olivia, I am 21 and I live in Brisbane. My passion is for acting, dance, and of course my campaign: ‘Change The Box’ -to have athletes with Down syndrome included in the Paralympics. I was lucky enough to be a finalist as Young Australian of the Year in 2018. I travelled across Australia, through the UK to Scotland and addressed the United Nations in New York. Down syndrome categories are now being introduced at national levels in some sports, like athletics and are on trial at international levels. We saw that at the INAS games in Brisbane in 2019.

I graduated from NIDA’s -Young Actors Studio and I am working hard at my dream to be an actor. Right now I have a TV commercial and two short films on the go. During lockdown, online dance has been my fun and fitness. I can’t wait for lockdown to end and Hollywood to come calling!

My challenge is to post 21 killer dance moves over October. Join me and try out my moves, add them to TikTok, add a costume and your interpretation, tag me so I can rate you, let’s have fun. Warning! Lycra optional – but I do love the splits!!

Gerard O’Dwyer was born in Ireland and moved to Australia with his family at the age of two. He was fascinated with film from an early age and learnt the entire dialogue of the original, The Lion King, subsequently wearing out the tape in the process. His first performance was as Zazu in a school production of The Lion King. Gerard’s first time acting in a short film entitled, Be My Brother, earned him Best Male Actor at the 2009 Tropfest Film Festival, with the film also winning Best Film.

He has used his dramatic work as a platform to advocate for inclusion on Nine Network’s TODAY, Seven Network’s The Morning Show and Network Ten’s Studio 10 and The Project.

Gerard has been an advocate and ambassador for a number of inclusion campaigns and was awarded the Emerging Leader Award at the National Disability Awards due to his disability led advocacy. He is currently in pre-production for his next upcoming feature film.

You can read more about Gerard here.